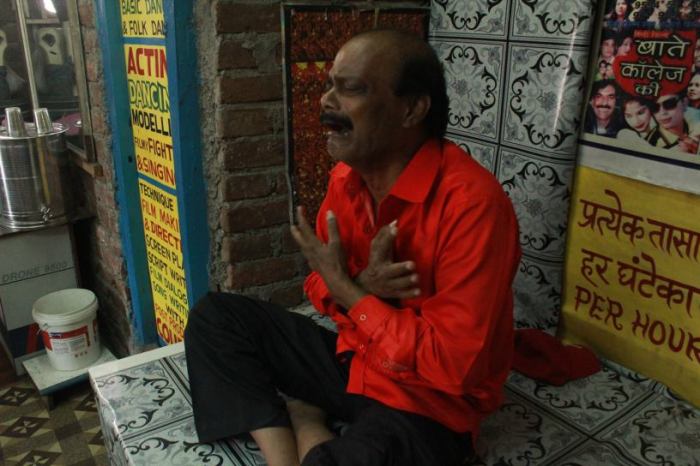 In a windowless room, situated deep inside Asia’s largest slum — Dharavi, 31-year-old Razik Siddique is nurturing his dream of entering the Hindi film industry, with guidance from his coach, Baburao Ladsaheb.

Ladsaheb, a skinny man in his 50s with an overgrown moustache, has on a colourful cap and a red shirt; he teaches aspiring actors from the lower income strata of society key skills: acting, dancing, performing stunts, and recreating dramatic sequences — all for a paltry fee of Rs 450 per month.

Ladsaheb believes his acting institute — the ‘Five Star Acting and Dancing Institute’ — is perfect for ‘talented youngsters from slums’ to hone themselves for supporting roles in Hindi films. Some of his students have worked in Danny Boyle’s 2008 Oscar-winning Slumdog Millionaire, Amitabh Bachchan’s 2009 hit Paa and Iranian filmmaker Majid Majidi’s upcoming movie, Beyond the Clouds.

“I struggled as an actor in my heyday, and found little support elsewhere. Hence, I took up the teacher’s mantle to teach these youngsters and honestly, they cannot afford an Anupam Kher’s Actor Prepares or Subhash Ghai’s Whistling Woods. So I do my best,” Ladsaheb says nonchalantly, as his students, ranging from six-year-old kids to adults, follow his instructions and re-enact various expressions.

Ladsaheb himself switched jobs from being a painter to becoming a backup dancer in Bollywood and eventually landed a few roles in Marathi cinema. Huge posters of his 2011 Marathi film Baburao Mhantoya Mithya Maruya (Baburao Says Let’s Embrace) in which he played 11 onscreen roles and handled varied production tasks such as direction, editing etc, adorn the walls of his institute.

Although the movie fared badly in local cinemas, Ladsaheb is proud of his achievement. He says the movie deals with religious unity and is entirely shot in Dharavi using indigenous talent and sends a message that good artists can rise from ghettos and slums too.

“Youngsters need to be very dedicated to art when they decide to enter films, as temptations and easy money exist (and) can derail dreams,” Ladsaheb says, recollecting tales of his former students who gave up acting to performing in the city’s ‘dance bars’ to make quick cash.

A montage of photographs of his most successful alumni is framed on the wall opposite which the students dance to popular Bollywood songs, matching steps with Ladsaheb who chides them for not being responsive enough.

“1, 2, 3, 4… twirl around and shake your head,” Ladsaheb shouts as noise from his music system drowns out other sounds and students jump to Bollywood’s evergreen songs from the 1990s.

While the western suburbs of Andheri Lokhandwala and Bandra are the hub of activity for aspiring Bollywood starlets and newbies, not many would venture further into areas such as the 500-acre Dharavi, known mostly for its small-scale industries and slums.

But for many, Ladsaheb is the only mentor they can trust and afford monetarily as months of auditions and preparations take a toll on their financial status.

“I work as a driver but dream to be a hero or act in some films. I am a big fan of Salman Khan but Nawazuddin Siddiqui inspires me with his success story,” says Razik, who emulates Salman Khan’s mannerisms and hairstyle from the latter’s movie Tere Naam.

Ladsaheb says serious aspirants train with him for a year before auditioning while impatient ones opt for ‘short and simple’ three-to-six month courses before landing some supporting roles.

“I am married with two kids and have faced numerous challenges. Right now, I want to dedicate three hours every weekend and learn acting from Ladsaheb before auditioning,” Razik adds.

“My students may not become lead actors because Bollywood needs a certain kind of ‘muscular and chikna (fair) boys’ to play lead characters. But talent will definitely take them far if they focus,” he adds.

Some of the skills Ladsaheb teaches exist only in Bollywood’s lexicon and are turning obsolete with the changing paradigms of Indian film industry. Standing on an elevated dais, Ladsaheb teaches his 30-odd students ‘how to cry dramatically’, ‘tie a scarf’, ‘modelling for hair oil’ and ‘posing for advertisements’.

“In Bollywood, neither male nor female but talent sells at the box-office (sic),” says Ladsaheb, adding, “Ordinary people do face challenges in breaking into the big league.”

His words are bone out by a recent article in Caravan magazine, which had highlighted how marginalised aspirants scramble for a chance to enter the film industry and strut their skills. Numerous fraud agencies cheat them with false promises while Bollywood itself shuts its doors on the poor.

The acting institute run from Ladsaheb’s one room residential premise in Dharavi has posters and boards advertising his services across various segments including Bollywood acting, western dance, stunts, sword fighting and high jumping.

Many young aspirants travel to Ladsaheb’s Institute from across the city’s outskirts of Vashi, Kalyan and Vasai every Sunday to practise and hone their techniques.

“I work as an assistant technician but always desired to be an actor. I saw a newspaper advertisement about Ladsaheb’s classes and immediately enrolled. I want to be a good artist,” says 21-year-old Rehmat Ali Khan.

“But no Bhojpuri films for me,” Rehmat quips, while Ladsaheb chides him for his statement.

“No industry is small and no language is inferior. Learn to act in every dialect and work doubly hard and you may join the likes of Ravi Kissen,” he advises his young protege.

“Rehmat has auditioned with Mukeshji for a role but wants to hone his skills. He has been promised a role,” Ladsaheb grins, while warning his students to build stamina and endurance to work shifts and long hours in Bollywood.

Rehmat meanwhile wants to work with Bollywood actor Aamir Khan and dance behind other big stars such as Hrithik Roshan. Ladsaheb supports his dreams:

“Mumbai is the land of dreams,” he says. “And anything is possible if you are passionate about your art.”

SANN is a blog site with a focus on narrative storytelling from Mumbai and its surrounding regions.