The launch of augmented reality game Pokémon Go has been a resounding success for Nintendo and app developer Niantic. Reports suggest it to be the most popular mobile game in US history, with the number of daily active users at times surpassing Twitter, Facebook, and Tinder. But one of its most interesting features is not within the game onscreen at all.

Based on the 20-year-old Nintendo franchise, the aim of the game is to walk around real-world locations in order to capture “in the wild” Pokémon generated in the game. Using a smartphone’s camera, the augmented reality app allows players to find the Pokémon superimposed onto real spaces, with the aim to catch all the Pokémon in predefined geographical locations. Additional bonuses come through checking in at “Pokéstops” – smaller geographical landmarks that the game defines as significant. A visit to a café, pub, or bakery for example could see you rewarded with a number of items to make it easier to “catch them all”.

Playing Pokémon Go myself I have been fascinated by the element of urban exploration the game encourages, particularly around those familiar places now marked as Pokéstops. Wendy Joy Darby, in her book Landscape and Identity, argues that “place is indubitably bound up in personal experience”. I’ve lived in Norwich all my life, for example, and I’d like to think my personal experience means I know the city quite well. Yet even I have found myself surprised at some of the locations the app has identified as culturally or socially significant in some way.

Walking around and viewing Norwich through the game’s augmented reality, I’ve found myself discovering the city anew. I’ve stopped at things I’ve seen before but never really considered: paving slabs decorated with cakes, sculptures I’ve often walked past but never really looked at. And some things I’d never laid eyes on, such as plaques celebrating remarkable people or interesting architecture that I’d encountered only by being led on detours by my quest for Pokémon. 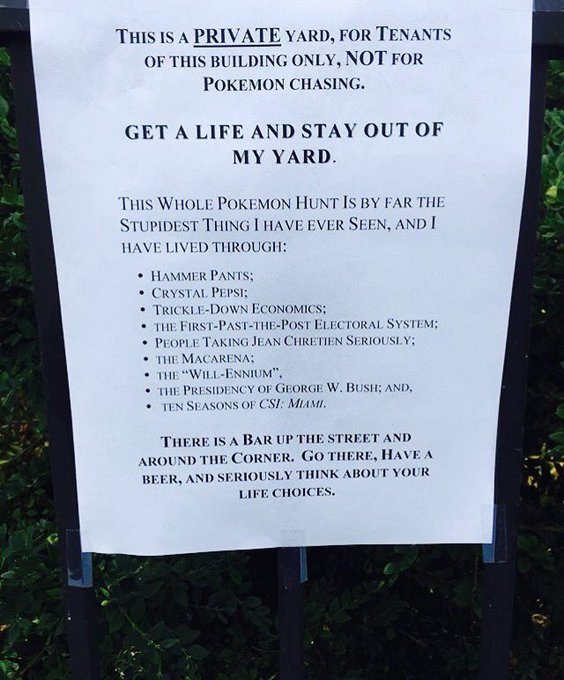 … turns out Pokemon Go is NOT for everyone. Stole this from my friend Amanda in Vancouver. “Get off my lawn!”

The significance of these places is determined by developer Niantic. Once part of Google, Niantic previously developed Ingress, another augmented reality geolocation game that required players to travel to specific real-world locations to capture “portals”.

Initially these locations were chosen by Niantic based on historical or cultural significance, yet as the game evolved more locations were included based on geo-tagged locations from Google or from suggestions from players. The same technology is in Pokémon Go, and some businesses have gone with the trend and paid to attract Pokémon to their businesses in order to cash in on a Pokémon-activated commercial windfall.

Whatever in-game rewards these Pokéstops offer, they also offer up the opportunity to view my city with the eyes of a tourist once more, allowing me to see places I know well but from a fresh perspective.

Writing in 1977, humanistic geographer Yi-Fu Tuan argued that “what begins as undifferentiated space becomes place as we get to know it better and endow it with value”. What seems to be happening now is that Pokémon Go is becoming a tool with which its users can instantaneously assign value to places. Transforming mere space into a definite place, the game imbues familiar and everyday places with an exotic aura. A mundane cityscape now has potential to house rare Pokémon, and so becomes a site of pilgrimage for dedicated players.

On launching, the app reminds players to remain alert and stay aware of their surroundings at all times. While ostensibly a reminder to keep safety in mind and not walk out in front of traffic or otherwise get injured while playing, it reads also as a reminder to take a moment to appreciate, not just the augmented reality of the game, but the places in the real world behind it with new eyes.

The Pokéstop passed on a daily commute could hold the key to capturing an elusive Charizard), but perhaps it can also become a place we get to know better in the real world.